I’m proud to announce that Speed of Fencing is screening in New York again! It is the first short film to play at the NewFilmmakers Spring 2012 show on April 15th. Unfortunately, once again for me, I won’t be able to attend because of US Nationals. (I swear, it’s like they knew.) Anyway, below is more about NewFilmmakers from their website. Come and check it out if you’re in the area!

The NewFilmmakers Series was begun in 1998 by NYU Film Students in order to show their work and promote themselves in New York film community. Then, and now, most festivals and screening programs in the city only screened known and established filmmakers and there were few that are open to new filmmakers.

Without sacrificing our original mission NewFilmmakers has grown into recognized international
screening series and over the past fourteen years has screened over 600 feature and 2,000 short films. In 2000 we brought the Havana Film Festival to New York and in 2002 we started the highly successful NewFilmmakers Los Angeles. Recently we started NewFilmmakers Online.

NewFilmmakers screens a wide range of films including animation, documentaries, shorts, and features. Many are films and videos overlooked by traditional film festivals. NewFilmmakers NY screens every week and sometimes more at Anthology Film Archives on the Lower East Side. NewFilmmakers also programs the Soho House Screening Series in New York & Los Angeles. 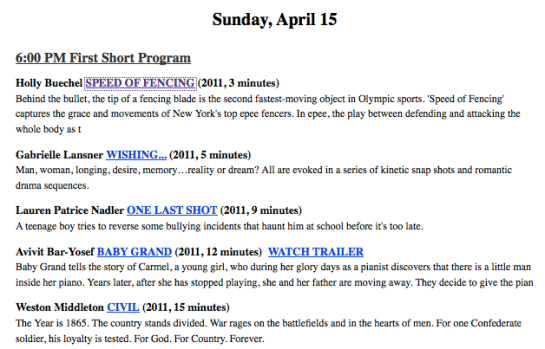